Oxygen Sensors Are a Critical Key to Passing Emissions

Automotive exhaust emissions are everyone's concern because we all breathe the same air. 50 percent of Americans live in areas that exceed national clean air standards. Reducing tailpipe emissions, therefore, is a top priority in the effort to fight air pollution.

In 1976, Bosch introduced what would eventually become one of THE most important technologies for reducing exhaust emissions: the oxygen sensor. By 1996, Bosch had produced its 100,000,000th oxygen sensor.

Today, Bosch oxygen sensors are original equipment on a wide variety of European, Asian and domestic vehicles and are the #1 best selling brand in the aftermarket.

Oxygen sensors have been standard equipment on passenger car and light truck engines since 1980-81. Most vehicles have one or two oxygen sensors (two are typically used on selected V6 and V8 engines starting in the late 1980s). Since the introduction of Onboard Diagnostics II (OBD II) in 1995-96, the number of oxygen sensors per vehicle has doubled (the extra sensors are used downstream of the catalytic converter to monitor its operating efficiency).

Yet, as important as oxygen sensors are today, few people are even aware of their presence, let alone the key role oxygen sensors play in engine performance and reducing pollution. One survey found that 99.7 percent of all consumers did not know their vehicles even had oxygen sensors!

How the Oxygen Sensor Fights Pollution

The sensing element on nearly all oxygen sensors in use is a zirconium ceramic bulb coated on both sides with a thin layer of platinum. The outside of the bulb is exposed to the hot exhaust gases, while the inside of the bulb is vented internally through the sensor body or wiring to the outside atmosphere.

The speed with which the oxygen sensor reacts to oxygen changes in the exhaust is very important for accurate fuel control, peak fuel economy and low emissions. The air/fuel mixture in an older carbureted engine doesn't change as quickly as that in a throttle body fuel-injected vehicle, so response time is less critical. But, in new engines with multipoint fuel injection, the air/fuel mixture can change extremely fast, requiring a very quick response from the oxygen sensor.

As an oxygen sensor ages, contaminants from normal combustion and oil ash accumulate on the sensing element. This reduces the sensor's ability to respond quickly to changes in the air/fuel mixture. The sensor slows down and becomes "sluggish".

At the same time, the sensor's output voltage may not be as high as it once was, giving the false impression that the air/fuel mixture is leaner than it actually is. The result can be a richer-than-normal air/fuel mixture under various operating conditions that causes fuel consumption and emissions to rise.

The problem may not be noticed right away because the change in performance occurs gradually. But, over time, the situation will get worse, ultimately requiring the sensor to be replaced to restore peak engine performance.

Oxygen Sensor Failures Can Mean Big $$ In Repairs If Not Replaced

The normal aging process will eventually cause the oxygen sensor to fail. However, the sensor may also fail prematurely if it becomes contaminated with lead from leaded gasoline, phosphorus from excessive oil consumption, silicone from internal coolant leaks, or using silicone sprays or gasket sealers on the engine. Environmental factors such as road splash, salt, oil, and dirt can also cause a sensor to fail, as can mechanical stress or mishandling.

A dead sensor will prevent the onboard computer from making the necessary air/fuel corrections, causing the air/fuel mixture to run rich in the "open loop" mode of operation, resulting in much higher fuel consumption and emissions.

An additional consequence of any oxygen sensor failure may be damage to the catalytic converter. A rich operating condition causes the converter to run hotter than normal. If the converter gets hot enough, the catalyst substrate inside may actually melt forming a partial or complete blockage. The result can be a drastic drop in highway performance or stalling because of a buildup of backpressure in the exhaust system.

Do You Know When It's Time To Replace Your Oxygen Sensor? 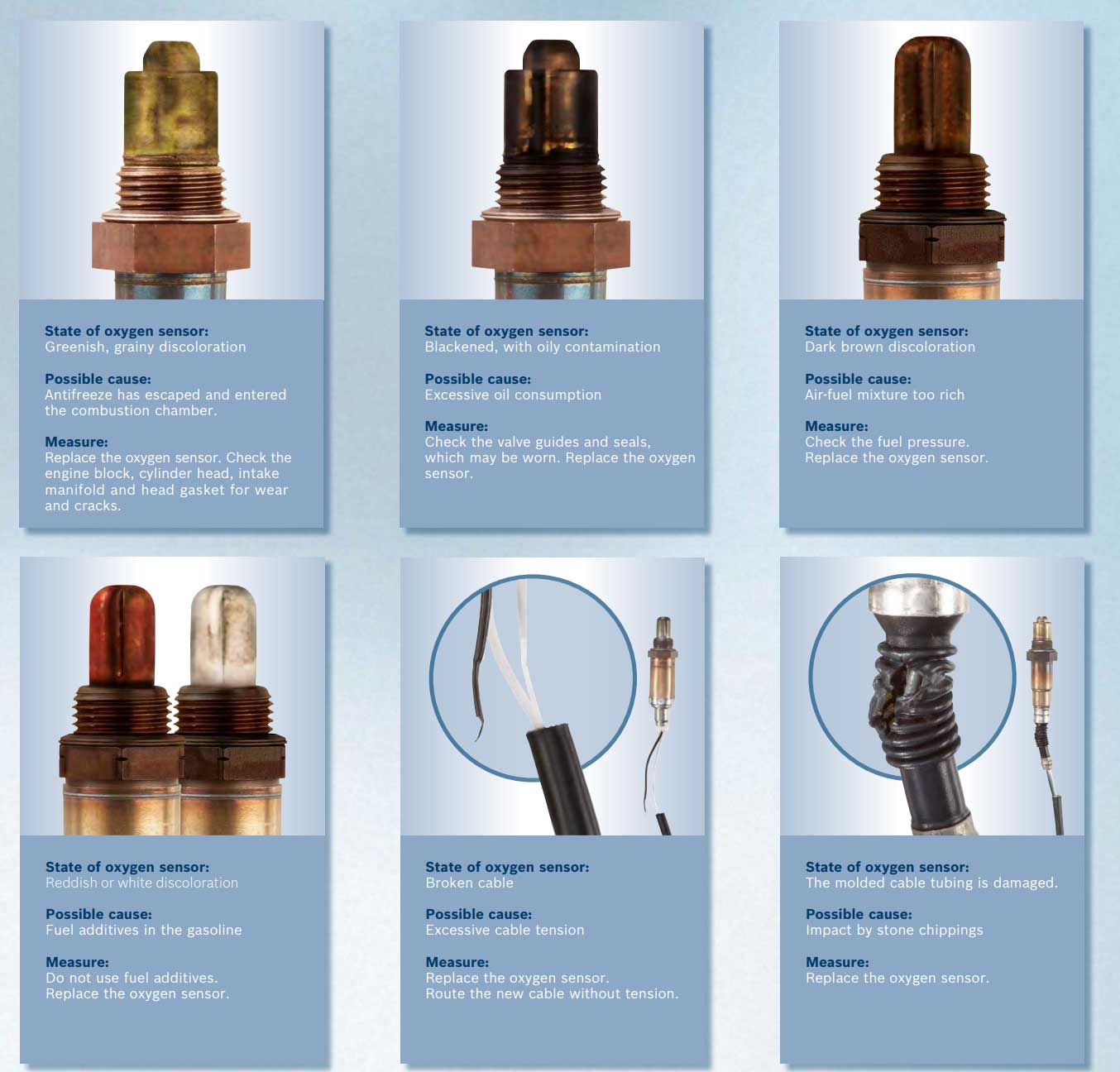 Although some cars have an oxygen sensor "reminder" light to alert you when it is time to check the oxygen sensor, most do not. So, unless there's a noticeable driveability problem or a "Check Engine" light on, most people have no way of knowing if their oxygen sensor is functioning properly or not.

The growth of emissions testing nationwide is changing that, along with the introduction of new "enhanced" emissions testing programs that simulate real world driving conditions while emissions are being measured. The latter is proving to be very effective at catching emission problems that formerly escaped detection. Great! So you'll find out your oxygen sensor is bad only when you flunk your emissions test! Nice to know, huh?

According to a study conducted by Sierra Research, Inc., in 1996, oxygen sensor failure is the "single greatest source of excessive emissions for fuel-injected vehicles" and the second most significant cause of high emissions in carbureted engines.

The U.S. Environmental Protection Agency (EPA) and the California Air Resources Board (CARB) have found that oxygen sensor replacement was required on 42%-58% of all vehicles that were subjected to an emissions check and were found to be emitting high levels of hydrocarbons (HC) or carbon monoxide (CO). Checking the operation of the oxygen sensor and feedback control system, therefore, should always be a priority anytime a vehicle fails an emissions test due to high HC or CO.

Oxygen sensor performance can be checked by reading the sensor's output voltage to make sure it corresponds with the air/fuel mixture (low when lean, high when rich). The voltage signal can also be displayed as a wave form on an oscilloscope to make sure the signal is changing back and forth from rich to lean and is responding quickly enough to changes in the air/fuel ratio.

To minimize the consequences of normal aging, Bosch recommends oxygen sensor replacement for preventive maintenance at the following intervals:

Keeping the oxygen sensor fresh may improve fuel economy as much as 10-15 percent (which can save $100 each year in fuel costs on average). Keeping the oxygen sensor in good operating condition will also minimize exhaust emissions, reduce the risk of costly damage to the catalytic converter and ensure peak engine performance (no surging or hesitating).

For these reasons, the oxygen sensor should be considered a "tune-up" replacement item just like spark plugs, especially on older vehicles (those built before the mid-1990s).

Get the sensor you need for your car online. Shop Audi parts, BMW parts, Mercedes parts, and parts for Jaguar and other luxury European brands online today!

Bosch Oxygen Sensors. Your Only REAL Choice to Avoid Problems

Bosch oxygen sensors are an exact replacement for the original (OEM/OES). The construction, number of wires and connectors are the same as the OE, which eliminates the risks associated with splicing and crimping wires (required for many "universal" replacement oxygen sensors).

Some three- or four-wire universal oxygen sensors also do not have the same heater circuit watt ratings as the OE sensor, which may cause driveability and emissions problems. There is also a potential for damaging the computer and/or oxygen sensor if a multiwire universal sensor is connected incorrectly. The lack of standardization of wire colors increases the risk of an incorrect installation.

So, when it comes time to replace your import car's oxygen sensor, there's no question that you'll get the best fit and performance from the OE oxygen sensors built by Bosch.

A Few Important Things to Remember

Heed these tips and you're well on your way to passing emissions with flying colors and saving money in fuel costs and repair bills:

Tip #1: Increased fuel consumption, driveability problems (hesitation or surging), "Check Engine Light" lit or emissions test failure could all be signs of an oxygen sensor in need of replacement.

Tip #2: An additional consequence of any oxygen sensor failure may be damage to your car's catalytic converter - a very expensive way to find out your oxygen sensor needs replacement!

Tip #3: Checking the operation of the oxygen sensor and feedback control system should always be a priority anytime a vehicle fails an emissions test due to high HC or CO.

Tip #4: Keeping your oxygen sensor(s) fresh may improve fuel economy as much as 10-15 percent (which can save $100 each year in fuel costs on average). Keeping the sensor in good operating condition will also minimize exhaust emissions, reduce the risk of costly damage to the catalytic converter and ensure peak engine performance (no surging or hesitating).

Tip #5: Thanks to Tom C. For Pointing This One Out. The oxygen sensor operates in an extremely hostile environment. Like a spark plug, it is threaded and screws into its mounting location. Normally the O2 sensor is supplied with anti-seize compound on the threads so it can be more easily removed at the specified change interval. Over time, the anti-seize compound loses its effectiveness and the sensor can become "welded" into its location, making it nearly impossible to remove using normal tools. Using excessive force to remove the oxygen sensor may damage the sensor and surrounding components. If the sensor becomes seized in its mounting location, a simple 15 minute replacement job can become a much more complex and difficult task. Replacing the O2 sensor within the specified change interval will minimize the possibility of this problem and additional component damage. Bear in mind: A non-functional or visibly damaged oxygen sensor may cause you to fail an emissions test if you live in an area that requires regular emissions testing.

Here is a list of emissions parts to look at if you have problems passing your local emissions tests:

Read About Your VIN & Where To Find It

The Complete Guide To Spark Plugs

These repair tips are designed only as a starting point. Please seek the assistance of a professional mechanic for all repair problems beyond your capabilities.

The Latest and Greatest
Sign up for sales, coupons, special offers and product information from AutohausAZ.
Loading Cart...

You Are All Set!

You will receive your first newsletter within 1-2 weeks. If you wish to unsubscribe from our newsletter at any time, open one of our newsletter emails , scroll all the way to the bottom and you will see an unsubscribe link. If you have have any questions or concerns, please contact our Customer Service.

Thank you for choosing to sign up for AutohausAZ newsletter. Please provide additional information below and click the Confirm button to finish.

We didn't find any parts for .
We found part(s) for .
Loading Cart...
OEM KIT

In Stock
Ships within 1 Business Day

Low Stock
Ships within 1 Business Day
Reg
List
+Core
Can't Find What You Need?
Fill out a parts request and we'll be happy to locate the parts for you.